What Your Grocery Store Will Look Like In An Emergency

Jason Kelly is an author and blogger living in Japan. He has been documenting events at his blog since the earthquake hit last week. In his latest post, aptly titled Cleaned Out, Kelly gives us a picture tour of a grocery store in Sano, Japan, about 40 miles northwest of Tokyo.

According to Jason, infrastructure damage, rolling blackouts and other problems have left about 35% to 50% of all stores in his town closed, with grocery stores completely out of food. Gas stations are either rationing fuel or have run completely dry.

Reports from all over Japan indicate that similar events are unfolding throughout the country.

What your grocery store will look like in an emergency: 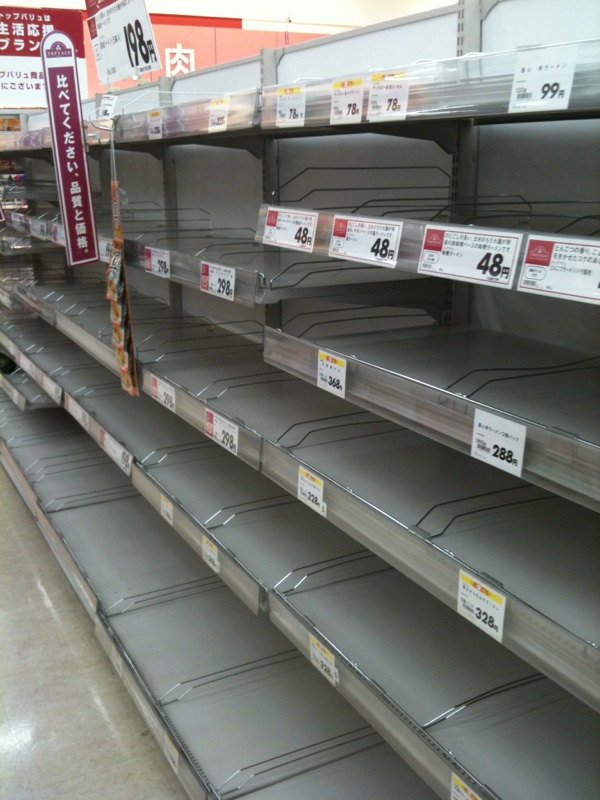 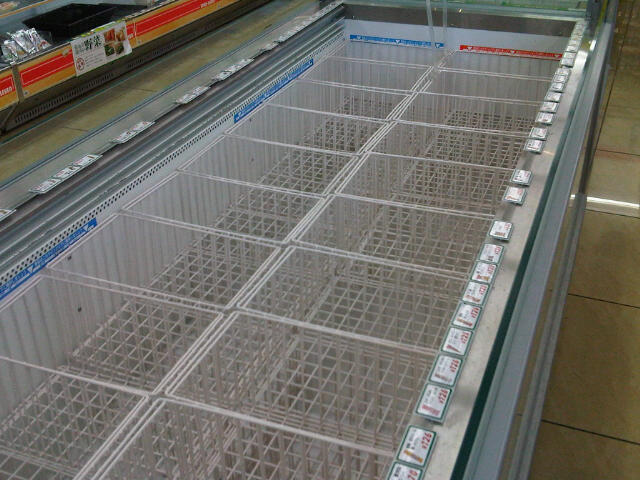 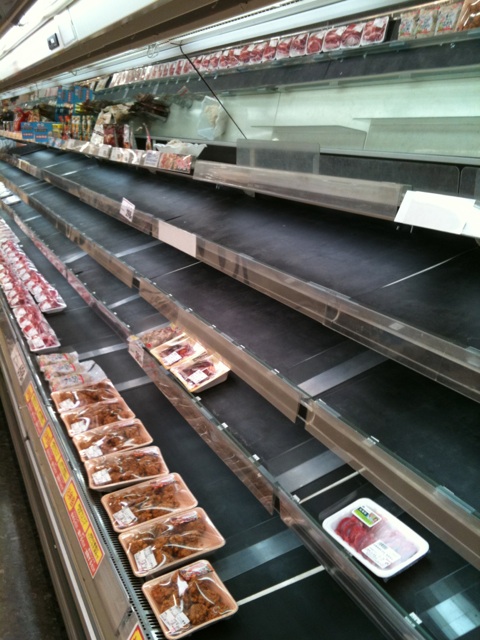 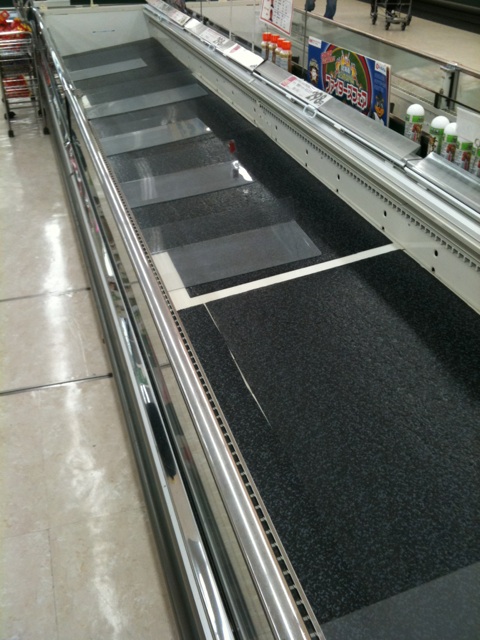 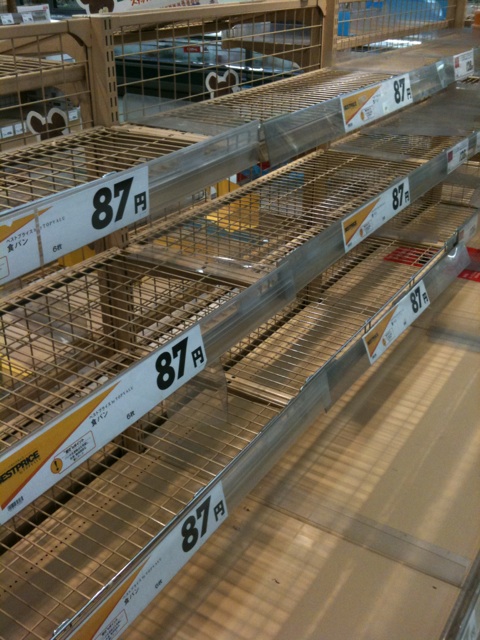 The following video was originally posted in our Japan News Updates, but is applicable here. This is an unidentified Japanese city’s grocery store post-Tsunami:

The Guardian reports that panic buying and fear is spreading:

People in the capital, home to 12 million, snapped up radios, torches, candles, fuel containers and sleeping bags, while for the fourth day there was a run on bread, canned goods, instant noodles, bottled water and other foodstuffs at supermarkets.

Retailers said the panic buying was reminiscent of the oil crisis in the 1970s.

The electronics firm Panasonic said it was increasing production of batteries, which were being bought in large quantities as far away as Hiroshima in the south-west.

Fears are rising that if the hoarding frenzy continues it will affect the ability to deliver emergency supplies to the disaster zone. “The situation is hysterical,” said Tomonao Matsuo, a spokesman for the instant noodle maker Nissin Foods. “People feel safer just by buying Cup Noodles.”

The last place you want to be during a disaster is scrounging for scraps at the grocery store.

A perfect example of the panic buying that ensues depending on the disaster or emergency of the moment is what we are seeing with Potassium Iodide tablets. The essentials will go first, within a matter of hours. If you don’t have what you need before an emergency, don’t plan on getting it after it has happened.

Japan in Jason Kelly’s own words:

In the Quake Zone

So it went. Wave after wave coursed through the land, sending power lines swinging and roofs crashing and the ocean surging. The trains stopped. The emergency announcement system blared that the power had gone out due to the quake.

As darkness descended and still the power stayed out, people lit candles in their homes. I moved around the city to see how it coped with the situation, even as the tremors continued. Traffic lights didnâ€™t work, so cars edged their way cautiously into big intersections until the police showed up later to direct. Islands of light betrayed where emergency power had kicked in: the hospital standing tall and staying busy, a home for the elderly that was a type of hospital itself, vending machines that apparently contain batteries to keep selling drinks through any crisis.

A few convenience stores had power, but quickly no food except the dried, instant variety, and then even that was gone. People bought magazines, which I thought odd until I saw by the looks on their faces that what they sought was a part of normal life that had seemed so banal half a day earlier. In a snap, anything that symbolized that placid pace through a typical day became valuable, so off the shelves it flew.

Darkness fell, really fell when no man-made glows pushed against it in a million domes of modernity. The stars came out. I noticed them with joy because they were much brighter in the purer darkness. They made me think of soldier stories where men noticed something beautiful in nature as they fought, like a flower on the edge of a foxhole or a red-winged bird singing on a branch shot through with holes. I observed the world through no such dire circumstance, but the post-quake landscape gave me enough of a nudge in that direction to better understand my fellow man under duress.

I climbed a hill at the edge of town to look down on the sea of darkness. It was creepy. Where usually an endless field of lights extends to Tokyo, only a few areas of light appeared. Directly below the hill, eerie pools of headlights moved slowly around, many looking for missing family members who were unable to take the trains home. There were no city lights around the cars, just the headlight pools drifting along invisible grids like ghosts shaken from their graves.