What Did the Northeast Learn From Sandy? Apparently, Not Much Just over 3 months ago, the Northeast was paralyzed after Superstorm Sandy pummeled the East Coast. Within a matter of days, despite a week of warnings about the impending storm, people in New York City were dumpster diving and begging FEMA to help them. They were pleading with the cameras for food and water because they were starving. Some people still have not recovered – there are still nearly 2000 homes in which people are crouching in the dark, without heat, electricity or running water.

Fast forward to the current nor’easter bearing down on the region, Nemo.

The Northeastern US is bracing itself for snow measured in feet, not inches. Nemo is predicted to be one of the top ten worst blizzards in history. Blizzard warnings are in effect for New Jersey, and New York, Massachusetts, Rhode Island, Connecticut, New Hampshire, and Maine.

Does anything sound familiar about that list of states? Oh yeah – many of them were among the hardest hit back in October, when the last “storm of the century” hit.

One might think that people would have learned a lesson from Sandy and prepared ahead of time for the possibility of an ice- induced power outage and the likelihood of being snowed in for a few days.

Residents of the Northeast are storming the grocery stores like a horde of locusts, grabbing anything and everything, filling their carts in a panic, even as the first snowflakes were drifting to the ground.

These aren’t well-thought-out shopping trips – they are laying siege to the stores like Huns pillaging a village in Eastern Europe, leaving only destruction and barren shelves in their wake.

Photographs speak a thousand words. Store shelves have been emptied by those who don’t already have enough of a stockpile to get their families through a blizzard.

The last multi-state power outage, just about 100 days ago, is clearly a vague memory. It was an event that somehow, did not make enough of an impression on people. For most, it seems that the fervent vows of being better prepared disappeared with the darkness as soon as the lights came back on.

Here are some of the preparedness measures being undertaken across the region.

Bryan McDonald pushed a shopping cart heaped with goods while his wife pushed a baby carriage. They have a 7-week-old child to consider. They don’t want to be left unprepared when the storm named Nemo comes to do its thing.

“Water, canned goods, and snacks in case we lose power,” Bryan said. “Those are the main things.”

Judy Nielsen of Sturbridge was buying for herself and her husband — both are on a vegan diet. Ms. Nielsen stocked up on vegetables, fruits and water.

While people are to be commended for at least going to the store before the storm hits this time, why on earth do they need to, so soon after Sandy? Why do they feel that one trip to the grocery store equals preparedness?

One common statement among the prepping community after Hurricane Sandy was that hopefully, people would begin to see the light and understand the need for preparedness. As a group, many of us expressed the fact that the aftermath of the storm should prove, once and for all, that you truly are on your own after such an event.

We read reports of people standing in line for up to 5 hours for a single MRE and a bottle of water. We heard about apartment dwellers defecating in the hallways. There were photos of people eating from dumpsters. We felt sympathy for the elderly, trapped cold, thirsty and alone at the top of highrises.

Through it all, many had hope that this would be a turning point for the preparedness movement, while others were skeptical that people would accept the event as anything other than an unpleasant blip on their radar of football games, American Idol and weekly manicures.

Judging by the look of the grocery stores in the Northeast, the skeptics were right. The psychological inability to accept that bad things happen, the battle of cognitive dissonance against thinking about a change of reality, and the cultural bias against perceived negativity, have overruled common sense and learning from experience, once again.

Once again, preppers are left, shaking our heads, asking what it will take to wake people up. 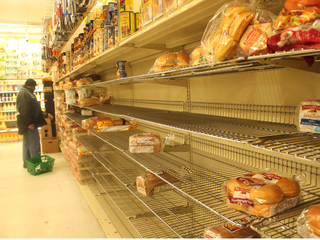 Contributed by Daisy Luther of The Organic Prepper.

Daisy Luther is a freelance writer and editor.  Her website, The Organic Prepper, offers information on healthy prepping, including premium nutritional choices, general wellness and non-tech solutions. You can follow Daisy on Facebook and Twitter, and you can email her at[email protected]