Society as we know it will break down and collapse in a five stage process outlined here. While it can be accelerated by certain events like war, a natural disaster, pandemic, terrorist attack, or even an impending asteroid impact, history has shown that economic collapse will essentially happen in this five stage process. To survive the collapse, it is important to read and interpret the signs and understand what assets are important to the current situation so you can be prepared for the worst thereby allowing you to survive intact and with as little damage as possible.

Everything is good and the economy is thriving. A high standard of living has been achieved. This is the way things should be. Goods are cheap and readily available. Everything seems to be in abundance. Stores are filled with retail items ready to be purchased. Life in general is good. The nation’s working infrastructure is solidly intact and working well. However, the idea that everyone is entitled to have what others have earned now permeates society. Redistribution of Wealth Policies are implemented and quietly woven into the fabric of society. Unchecked and under the guise of fairness and equality, these policies slowly decrease productivity and increase dependency on government entitlement and welfare programs.

The economy goes into a slow but steadily increasing decline. Unemployment is on the rise. Ever increasing numbers of people receive government assistance in one form or another. People are paid not to work. Government spending has increased dramatically. The price of gold, silver, and other precious metals rise to prices unheard of just a few years earlier. Inflation reaches the double digit levels.

STAGE 3. It is Going to Get Worse

The total collapse of the economy begins after a significant and prolonged decline. The government implements price controls. Shortages on essential goods become widespread. Foreclosed houses sit vacant and deteriorating by the tens of thousands. Middle class neighborhoods begin to look like slums. The government begins to print currency to pay its bills and support the tens of millions on public assistance. Inflation increases even more and unemployment exceeds 25%. Banks and businesses fail at ever increasing rates. Nobody seems to have any money. Many are now homeless. Labor unions instigate strikes, civil unrest, and large scale riots. Government services are interrupted and unreliable. Local and national infrastructure is in decay. Violent gangs begin to appear and assert themselves. The government begins confiscation of firearms from law abiding citizens. Violence is everywhere. Cities and urban areas become very dangerous places to live.

At this stage, the country seems pretty much beyond the point of no return. However, things can still be reversed even at this stage if the right person at the top really believes in the basic fundamental concepts of Freedom, Independence, Liberty, and Individual Rights and is not afraid to do what is necessary to reverse the current trend. He will be vilified and hated because of his attitude toward personal responsibility, cutting entitlements, and ending welfare programs. Of course, if the right person were in power and did what needed to be done, none of this would have happened in the first place.

STAGE 4. The Grab for Power

The collapse can transition to this stage at any time after Stage 3. Most of the middle class have lost everything. What used to be well manicured middle class neighborhoods are filled with the carcasses of empty houses damaged and destroyed by vandals. The nation’s infrastructure has been seriously neglected and is in need of a major overhaul. The power grid becomes unreliable. Rolling blackouts are a daily occurrence. You can no longer buy or sell gold or own foreign currency. Inflation is out of control. Now the economy collapses. There is a rush for everything and the shelves go empty in a matter of hours. Society falls into chaos. The control of urban areas shifts when violent gangs takeover control of the streets and urban neighborhoods. The government issues restrictive measures in an attempt to control the economy. Everything is in short supply and heavily rationed. Food and gasoline is very expensive and there are very long lines to get them when they are available. Affordable quality health care is non-existent and your job is a distant memory. You will do without what you are unable to provide for yourself. You will discover what it is to live in a third world country.

Once all of the above has come to pass, the realization of the current circumstances at this moment must be all too obvious. It is too late to prepare at this point. What you did not acquire earlier, you are not going to possess now. Anything of value necessary for your survival has already been claimed. The situation gets worse… much worse.

Stage 5 is next… and it is not pretty.

The government implements martial law. Fighting between civilians and government forces break out nationwide. Maintaining more than a 30 day supply of food is considered hoarding food and is illegal. Severe poverty and starvation become a common sight. The government offers marginally acceptable food, water and shelter in exchange for your Freedom, Liberty, and Independence. Democracy ends and a Socialist form of government takes over under the guise of fixing society’s problems with the false promise that peace and prosperity will return better than it was just a few years ago. A Totalitarian regime assumes power and the individual freedoms and liberties once enjoyed by the people are completely eliminated.

As you can see, priorities change as the world changes. Your most prized assets of today – your good credit, luxury automobile, and career are no longer important after the economy collapses. 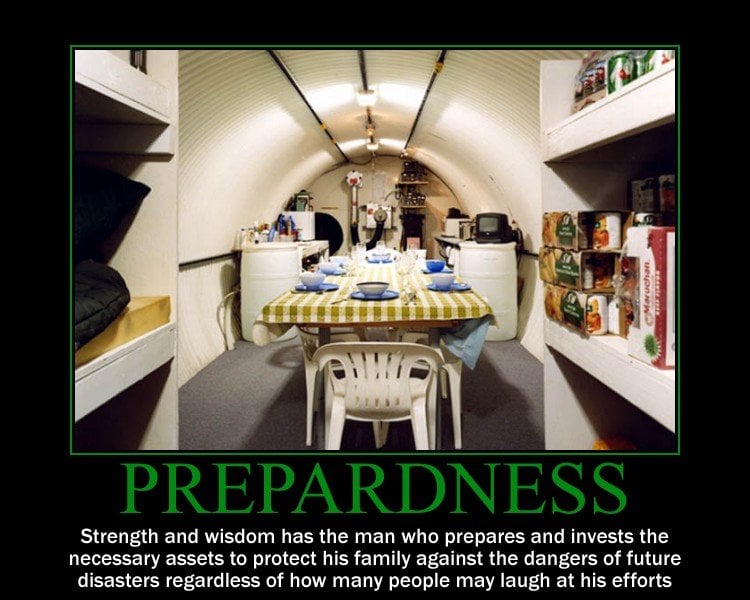 FAILURE TO PREPARE TODAY WILL INCREASE THE MAGNITUDE OF YOUR SUFFERING TOMORROW.

It is better to prepare 10 years too early than 10 minutes too late. Many who lack vision will say that it will never happen and for those who decide to live unprepared should consider the following statement.

LACK OF PLANNING ON YOUR PART DOES NOT CONSTITUTE AN EMERGENCY ON MY PART.

This article has been contributed by David Meyer. You can read more of his editorials at the Target of Opportunity web site.