When it hits the fan America’s population centers will explode in violence, looting, and total breakdown of law and order.

It’s a theory put forth by numerous survival and relocation specialists, and one that makes complete sense if you consider what happens in a truly serious collapse-like scenario.

Because of the urbanization of the U.S. population, if the entire eastern or western power grid goes down for more than a week, the cities will rapidly become unlivable. I foresee that there will be an almost unstoppable chain of events:

The number one threat that I concentrate on. It’s not terrorism, it’s not natural disaster, it’s not even government or war.

The major threat is population density.

Because every crisis that threatens, even a local crisis, can turn exponential because of close proximity to people who cannot help themselves. Even good people panic in a crisis…

So, where should you be when it happens?

To find the answer, let’s consider where we shouldn’t be.

Recent U.S. census data indicates that out of the 3000 counties in the United States, fully 50% of the population lives in just 146.

If you want to have any chance of surviving a wide-spread catastrophic event by avoiding the hordes that will be searching for critical resources in its aftermath, then check out the following map to get a visual reference of the areas you want to stay away from. 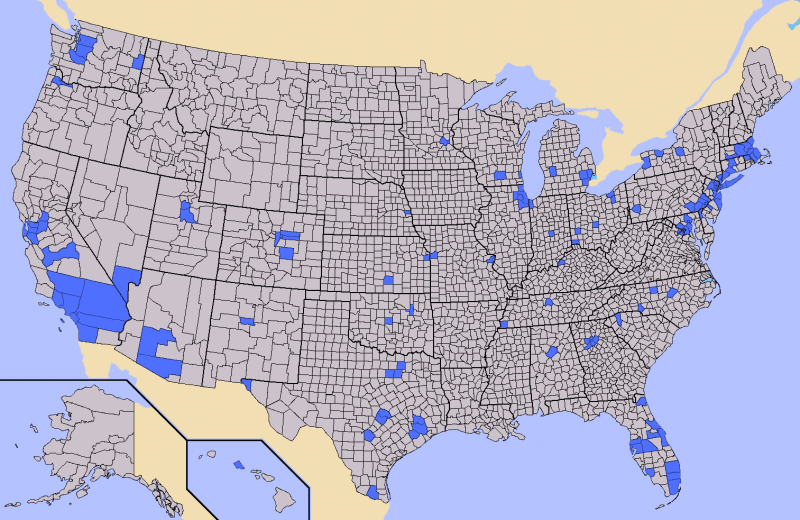 When considering your retreat locations or emergency evacuation routes, be familiar with the population densities of the area you’re headed to, as well as those counties in your immediate vicinity.

In his book Patriots, James Rawles specifically points out that Highway 80, running through California, will be one of the busiest evacuation routes in the country as millions of people pour out of major cities to flee disaster or in search of  food.

So, no matter where you are located, consider your proximity to high traffic thoroughfares going in and out of the city. During Hurricane Rita, which hit Houston several years ago, every major pipeline out of the city was jammed for hundreds of miles. Interstate 45 from Houston to Dallas was bumper to bumper traffic. Normally a 4 hour trip, those who didn’t evacuate in time were stuck on the highway without food, gas, sanitation, or potable water for upwards of 15 hours.

This is why Joel Skousen suggests that those looking for strategic retreat locations or homes outside of major cities consider highway proximity. Be at least 5 – 7 miles away from any major thoroughfare, which is generally outside the range people want to venture off familiar roads, and far enough away to make any ‘walkers’ too tired to attempt the trip without ample clean water and food.

If you have no choice but to be in a major metro area during a serious emergency situation, consider strategies that can help you remain sustainable in the city even in the midst of panic.