Life and Times of the Thanksgiving Turkey: He Never Saw It Coming

The Black Swan Theory is used by Nassim Nicholas Taleb to explain the existence and occurrence of high-impact, hard-to-predict, and rare events that are beyond the realm of normal expectations. One example often put forth by Taleb is the life and times of the Thanksgiving Turkey.

The turkey spends the majority of its life enjoying daily feedings from a caring farmer. Weeks go by, and it’s the same thing day-in-day-out for the Turkey. Free food. Open range grazing. Good times all around.

The thinking turkey may even surmise that the farmer has a vested interest in keeping the turkey alive. For the turkey, it is a symbiotic relationship. “The farmer feeds me and keeps me happy, and I keep the farmer happy,” says the turkey. “The farmer needs me, otherwise, why would he be taking care of me?”

Then, two days before Thanksgiving on Day 1,001, the farmer shows up again.

But this time he doesn’t come bearing food, but rather, he’s wielding an ax.

This is a black swan event — for the turkey.

By definition, it is a high-impact, hard-to-predict, and rare event for the turkey, who not only never saw it coming, but never even contemplated the possibility that it could occur.

For the farmer, on the other hand, this was not a black swan event. The farmer knew all along why he was feeding the turkey, and what the end result would be.

The very nature of black swan events make them almost impossible to predict. The point of this parable is to put forth the idea that sometimes we are the Thanksgiving turkey and understanding this may make it easier to begin to, at the very least, contemplate the possibility of far-from-equilibrium events.

This year, when you enjoy that drumstick or Turkey breast, give thanks to the latest victim of the black swan for being non-contemplative, otherwise, he may have bugged-out long ago and you’d be eating a chicken instead. 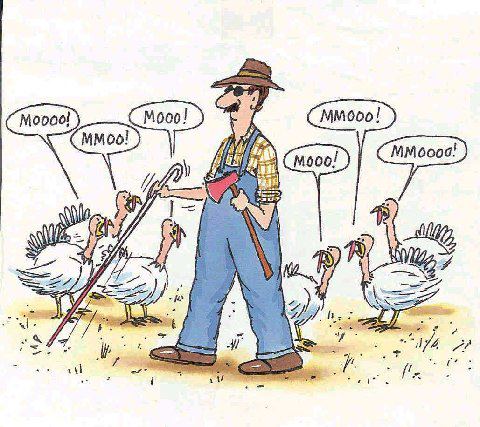