The Shovel and Hole Maneuver For Hiding Gold, Guns and Other Assets 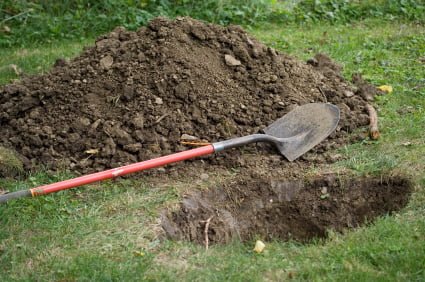 As the world falls further into economic crisis and political instability, precious metals accumulation among the general public has seen an unprecedented rise. Hoards that include precious metals, guns, and other physical assets are growing across America, as those with a feeling of unease about the government’s ability to mitigate the problems facing our nation look to secure some of their wealth in non-paper holdings before the bottom falls out of our financial system.

The distrust with the system in general extends not to just financial markets or the Federal Reserve, but the very banks that are supposed to be responsible for holding our wealth securely. The prospect of cascading bank failures and Great Depression style runs, openly discussed in recent comments by Fed Chairman Ben Bernanke himself, is motivating more and more people to take their personal wealth preparedness plans to the next level.

At one time, securing your assets at your local bank branch seemed like a good idea. But we can no longer consider traditional safe deposit boxes as safe. This has has been demonstrated recently in England with the seizure or thousands of supposedly secure boxes, as well as California, where local governments have already seized assets of box holders under the pretense of unclaimed property (even though it is perfectly clear who the owners are in many cases):

These days, thieves, failing banks and government safe deposit box seizure aren’t the only concerns. Americans are also increasingly concerned by the possibility of a repeat of FDR’s gold confiscation initiative, and in many cases, gun confiscation as we saw during the Hurricane Katrina debacle. The point is, that in the very middle of a crisis where you may need your precious metals, guns or other “tools” the most, is exactly when government may move to remove those from your possession.

With that in mind, what should a precious metals investor (or anyone looking to keep important assets out of sight) do? According to Ben Steverman, you might want to seriously consider the oldest trick in the book:

If you’re looking for a safe place to put your investments, Chad Venzke has a suggestion: Dig a hole in the ground four feet deep, pack gold and silver in a piece of plastic PVC pipe, seal it, and bury it.

The 30-year-old central Wisconsin resident trusts no one but himself to store and protect his gold and silver—not banks, not investment funds, and certainly not the government. It’s precisely because of this suspicion of institutions that he invests in those metals to begin with. In case of emergency, “you always want to have your precious metals within arms reach,” he says.

When hiding bulkier assets underground, you may need to disassemble them and include water-proofing to prevent damage. Items like guns, ammunition, a radio, and even reserve emergency food rations could be considered as essential shovel-and-hole gear for a crisis that may require a bit more care than coinage.

There are, of course, some dangers with this method, so be forewarned:

For those storing gold and silver in or around their home, the most immediate danger isn’t a crisis or a dip in metal prices. It’s theft. The FBI, which tallies the theft of precious metals and jewelry in one category, says $1.6 billion was stolen in 2010, up 51 percent from 2005. Just 4.2 percent of the lost loot was recovered last year.

Metal detectors are a big worry. Basic detectors can find metal on the surface or in the first 12 inches to 14 inches below ground, depending on soil conditions…

And of course, you’ll want to keep mum about your new investments and how they’re being stored, because loose lips will pose a threat to not just your gold hoard, but your life as well. If thieves get wind of your investments, they may show up not with a metal detector, but armaments, putting your entire family at risk.

In addition to the traditional method of digging a hole or a home safe, Bill Rounds of How to Vanish offers a couple of other home-hiding tips for precious metals or other assets:

A former burglar recommends a couple of techniques that may come in handy if you are stashing some of your wealth at home. Based on the idea that a burglar wants to get in and out of your house as fast as possible, the idea of leaving some cash, perhaps even some precious metals coinage (not the expensive stuff, of course) in a “hidden” but typical spot may work in your favor. In this case, you could even utilize a “dummy” safe — one that is secure and even bolted down, but can be removed with a bit of work with a crow bar or other tool. The burglar may find value in what you’ve ‘left for him’ and leave the really well hidden stuff behind, thinking he’s stolen everything there is.

Like Bill Rounds, he also recommends the hidden in plain sight strategy, with a little twist:

His number one recommendation for money was in toys in a young child’s room. As he explained, young children don’t have money, they have an abundance of toys and most parents don’t trust a child around money. Therefore, parents will rarely hide money there. In addition, when money is hidden, it is usually hidden away neatly and securely — a child’s room is rarely a neat place making it an unlikely place for money to be hidden. Plus with all the stuff in a child’s room, it is not someplace that a burglar can search quickly and get out.

Those who look to precious metals as a safe haven will obviously shy away from traditional storage methods. As such, you’ll need to take care and be meticulous when hiding these and other assets in or around your home. Nothing can be secured with 100% reliability, but if you get creative you can certainly increase your chances.