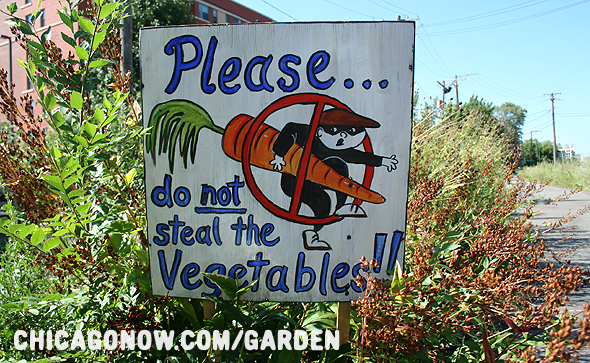 As the economy sours, food prices continue to rise, and more people find themselves out of work, it is becoming increasingly difficult to put food on the table. This is evidenced by the record numbers of Americans on food stamps with supplemental nutritional assistance program participation rates quickly approaching 50 million people.

As a result, those who have lost everything or can’t afford to buy their own food are now turning to theft to make ends meet. Reports from Chicago, Indianapolis, New York and other cities across the country indicate that organized teams of thieves are turning to a growing criminal trend:

After a summer of battling bugs, pulling weeds and digging dirt in the stifling hot weather, gardeners of the Grassroots Community Farm were nearly in tears over the latest insult.

They struggled several times recently for answers to an unexpected problem at their three-acre plot near 38th Street and Lafayette Road.

Who would steal their hard-won tomatoes right off the vine? Who cut the collard greens and swiped their sweet potatoes?

Apparently, the gardeners decided, it wasn’t deer from nearby Eagle Creek Park. Rather, it was the work of vegetable thieves who came equipped with shovels and plastic bags.

Their plot isn’t the only community garden in the city to suffer thefts and vandalism this summer.

“Thefts and vandalism are huge,” declared Kay Crimm of Grow Me gardens.

Last year, her group had a three-acre site near 46th Street and Arlington Avenue. It was plundered so badly that the gardeners left the site and moved to a plot at 46th Street and Post Road, she said, but it has “been ripped up, too.”

Thefts of vegetables, fruits and herbs are not just isolated to the Indianapolis area. The New York Times reports that thefts are rising across the five boroughs, and similar reports have emerged from Chicago:

AT the 700 community gardens sprinkled through the city like little Edens, the first commandment should be obvious: Thou shalt not covet, much less steal, thy neighbor’s tomatoes, cucumbers or peppers. But people do.

By midsummer, the urban irritant of garden pilferage was in full bloom, right in sync with the crops, the heat and the mosquitoes.

But to hear urban farmers speak, no borough, and no garden devoted to edibles, whether sprawling or thimble-size, is immune to theft. “Food is more attractive than flowers, especially in this economy,” said Marjorie J. Clarke, a caretaker at the flowers-only Riverside-Inwood Neighborhood Garden, known as RING.

On the Upper West Side, cucumbers are tops for filching; in Harlem, the main draws are chilies and herbs; on the Lower East Side, green and red peppers; in Brooklyn and Queens, tomatoes and squash. But then, “tomatoes are universally enticing,” Ms. Bukowski said.

While not as expensive as rubies, diamonds and emeralds, these tomatoes, cucumbers and melons are just as tempting and pricey. Heirloom plants and seeds that are all the rage can be more expensive than recent cultivars. These plants that new community gardeners favor sell for top dollar at farmers markets around Chicago. Then there are also the costs associated with being a member of a community garden. In allotment-style community gardens, gardeners rent plots to plant in every year.

After a community garden has been plundered it is normal to feel everything from anger; to pitty at the thought of the thief perhaps not having food security.

Ironically, the “Please Do Not Steal the Vegetables” sign included at the top of this article was itself stolen!

An inability to afford food and the resale value of quality vegetables will certainly continue to drive this trend going forward. While securing a community garden plot may be difficult simply because the owners do not have the ability to continuously monitor the land, those growing personal gardens around their homes should take note and consider some external security preparedness measures.

When it comes to food, a hungry thief will stop at nothing to take what’s available, whether it’s vegetables, fruit, micro-livestock, or even gardening tools that he can resell. Today, while stores are fully stocked with goods that remain moderately affordable, having your vegetables stolen is more of an inconvenience than anything else.

But, if the economic situation were to ever deteriorate into something more serious, where one’s family was depending on their garden for daily sustenance, then it becomes life threatening. For this reason, we advise establishing food security procedures now and becoming familiar with how to secure your provisions from would-be thieves.