Decision Making in Survival Situations: “He Died Because He Made the Wrong Decision Under Pressure” 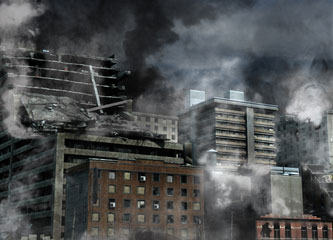 Editor’s Note: Back in the 1990’s, while most Americans were enjoying relative peace and stability, cities in the Balkan region of Europe were under attack. Tens of thousands of people who were one day enjoying coffee’s and sandwiches at local cafes were relegated to refugee status overnight. They were the lucky ones. For those encircled by military forces inside the cities, the struggle to survive had just begun. It went on for years.

Selco, who writes the SHTF School blog and recently produced The One Year In Hell Survival Course, was one of those left to fend for himself. In his online course, as well as his regular writings, he recounts the realities of the collapse he experienced.

In the following commentary he discusses decision making during highly stressful situations. Despite how prepared you think you may be, it’s critical to understand that a collapse of law & order changes everything. People who were friendly to you yesterday may be looking to steal your resources and leave no witnesses tomorrow. As Selco notes, your next decision could be your last, especially if it’s made as an emotional response under pressure.

We all usually keep forgetting that when SHTF things will be different in many ways.

We talk about lack of food, clean water, coffee, or simply lack of hygiene. And we say that people gonna die because of that and because of lots of violence. Based on my experience, all above is correct, but we also usually forget one simple fact: pressure!

Guy from my street worked before SHTF as a computer technician. Those years here were time when computers were started to be widely used in big companies. He was something like famous in that field, so he had good life, nice home, car, family and everything else.

When SHTF he just like great number of other folks was simply lost. While chaos was spreading through the city he stayed home watching through the window how people sporadically run across the street to avoid sniper fire and shelling.

He monitored how telephone lines went out, electricity and water too. Later he was trying to „catch“ some news over his radio that he used before for football (soccer) games broadcasts. His son later told us that they ate a lot of some old jam because they had eaten everything else.

And then one day he simply was forced to go out, they delayed that moment as much as they could, but when you watch your kid and wife go hungry it is very hard to just do nothing. You see those who are close to you slowly get worse and worse.

They found him some 300 meters from his house, some guys told him that they worked for government, and they are trying to restore peace.

They told him to show them his home and then shot him. When they came into his house first guy knock out the kid with rifle butt. Then they looked for gold. Then they played with wife. Anyway they kill her too, kid survived. I spoke with kid and we did not talk too much about details, it is rare people want to speak about any details from this time. Too much bad memories.

His story was not the only story like that in that time. Now you may think that they died because he was stupid, he was not prepared, he did not have weapon etc. All of that is correct actually.

But I like to think that they died because he made decisions under pressure, huge pressure. And it was wrong decision.

He waited for too long to choose correct moment to go out and find useful stuff like food, weapon or simply to connect with other folks.

And then one day situation caught him, and he was forced to make decision, to act under the pressure. As I said he was not only man who died that way, lots of other folks died in similar way.

Point is that we preppers and survivalist often forget that in survival situation we also have to make decisions under pressure. You might be great shooter, but are you ready to see loved ones suffering and making life or death decisions? It is harder than most people think.

Lesson here is to not be arrogant because you are a survivalist or prepper. Because you are that you escape first and you are not the bravest person who impresses whole neighborhood by getting shot first. You are also not overly careful and hide out until you run out of preps and have no choice but to go out.

We can be prepared.

What gives your mental side advantage is this:

I have seen other folks doing mistakes under pressure. I have seen man who got shot during a trade, because he wanted to get stuff from the other guy so hard, food again. His family at home was waiting for that badly, and he simply forgot common sense. This is what makes desperate people weak (and often dangerous too, because their actions are controlled by their chaotic emotions).

Guys realized he was desperate, get him to follow them, ambush and shoot him, take his stuff. They didnt finish him. He survived, point is that he was under the pressure to get the job done as soon as he can, so he simply forget common sense. Don’t be that guy.

Im faced with critical decisions every day working in emergency services. If you have more questions or want to share how you deal with high pressure situations, write in forum or comments below.

You can follow Selco’s story at SHTF School and learn how he survived one year in hell. Visit the SHTF School Forums an learn from other members of the community.