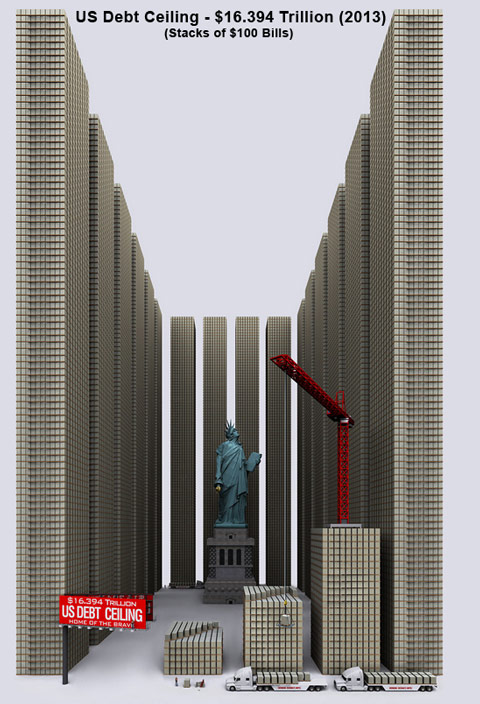 This visually represents the vast of enormity of the amounts of money owed by the U.S. just in the admitted debt, dated in this graphic to 2013.

Editor’s Note: The ship is already sinking, and while the masses are being placated to hold on, the insiders are looting everything on deck on their way for the life rafts. The next debt ceiling deadline is upon us, and the media will harp upon the crisis of funding only the most immediate budgets of the bloated federal government.

There will be another round of politics from grandstanding Congressmen on the economy, and likely every presidential candidate as well. But just under the surface is the real problem, and it is enormous. Unfunded in the near future, untold trillions in state and federal liabilities to various programs threatens to tear the seams of the nation apart. Millions would suffer without pensions, Medicare and other benefits they rely on to get by. Who will get left holding the bag when the SHTF?

In a shocking admission for most of mainstream America, the former U.S. comptroller general says the real U.S. debt is closer to about $65 trillion than the oft-cited figure of $18 trillion, thanks to unfunded liabilities which simply cannot be ignored. As The Hill reports, unless economic growth accelerates, he warns, “you’re not going to be able to provide the kind of social safety net that we need in this country,” adding unequivocially that Americans have “lost touch with reality” when it comes to spending.

As The Hill reports,

Dave Walker, who headed the Government Accountability Office (GAO) under Presidents Bill Clinton and George W. Bush, said when you add up all of the nation’s unfunded liabilities, the national debt is more than three times the number generally advertised.

“If you end up adding to that $18.5 trillion the unfunded civilian and military pensions and retiree healthcare, the additional underfunding for Social Security, the additional underfunding for Medicare, various commitments and contingencies that the federal government has, the real number is about $65 trillion rather than $18 trillion, and it’s growing automatically absent reforms,” Walker told host John Catsimatidis on “The Cats Roundtable” on New York’s AM-970 in an interview airing Sunday.

The former comptroller general, who is in charge of ensuring federal spending is fiscally responsible, said a burgeoning national debt hampers the ability of government to carry out both domestic and foreign policy initiatives.

He said Americans have “lost touch with reality” when it comes to spending.

Walker called for Democrats and Republicans to put aside partisan politics to come together to fix the problem.

“You can be a Democrat, you can be a Republican, you can be unaffiliated, you can be whatever you want, but your duty of loyalty needs to be to country rather than to party, and we need to solve some of the large, known, and growing problems that we have,” he said.

Of course, that is to say nothing of the other unfunded liability – America’s Pension Ponzi, as we detailed previously...

Just how big of a problem is this you ask? Well, pretty big, according to Moody’s which, as we noted last month, contends that the largest 25 public pensions are underfunded by some $2 trillion.

It’s against that backdrop that we present the following graphic and color from Goldman which together demonstrate the amount by which state and local governments would need to raise contributions to “bring plans into balance over time.”

Unfunded pension liabilities have grown substantially. There are several factors behind this, led by lower than expected investment returns and insufficient contributions from state and local governments to the plans. The two issues are related. The assumed investment return is used as a discount rate to determine the present value of liabilities. The higher the discount rate, the lower the estimated liability, and the lower the periodic payment into the fund a state or local employer is expected to make. There is, of course, no clear answer about what the discount rate ought to be, though the fact that the average assumption used by private plans has continuously declined for more than a decade suggests that the rates have probably been too high and that the current average assumption of 7.7% may come down further.

Contributions have also generally been lower than necessary to stabilize or reduce unfunded liabilities because of the rules around how those unfunded liabilities are amortized. Payments into pension plans are generally meant to account for the future cost of benefits accrued during the current year, as well as catch-up payments equal to some fraction of the unfunded liability left from prior years. Many plans target payment amounts that would work off this underfunding over 30 years, though some use shorter periods. However, the amounts of these payments are often backloaded, with the result that even if the “required” payment is made in full the unfunded liability often grows.

A separate but related issue is that some states have simply declined to make even the “required” contribution, which is probably lower than it should be in any case due to the factors just noted. For example, over the last few years New Jersey has made on average only around 40% of the expected payment. New accounting rules promulgated by the Government Accounting Standards Board (GASB) will penalize underfunded plans with a lower discount rate, but the change is fairly minor and, in any case, affects only the accounting; it will not impose any new legal requirements to make the contributions.

If state and local governments are ultimately forced to devote more resources to these obligations, the effect on state and local spending would be noticeable. Exhibit 8 shows the states’ pension contributions, as a share of gross state product, with two potential additions. The first is the level that would be required to simply meet the “actuarially required contribution.” To bring the plans back into balance over time, further contributions would be necessary. In aggregate this would raise government pension contributions by something like $100bn per year (0.6% of GDP), lowering spending in other areas (or raising taxes) by a similar amount. In theory, OPEB costs could push this adjustment a bit higher.