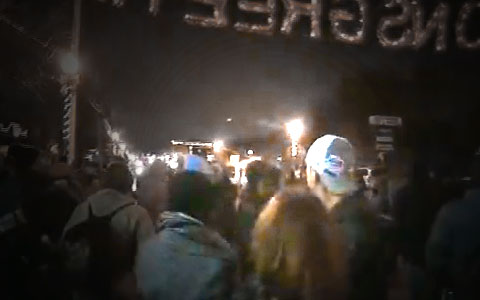 Updated: 12:49 AM CT An unidentified police officer was wounded in University City, MO, also part of the St. Louis metro area, and about 6 miles from Ferguson. The officer has been hospitalized and is reportedly expected to be OK.

Updated: 12:02 AM CT Reports say that Louis Head, stepfather of Michael Brown, was repeatedly shouting “Burn this bitch down” after the decision, while Brown’s mother collapsed in tears.

…Local Action 41 News reports that incoming flights into St. Louis have been re-routed. No inbound flights are allowed to land at St. Louis airport at this time. It is not clear whether this is related to the Ferguson riots.

…Fires rage. No firefighters respond to calls amid vandalism, gunshots in Ferguson… Autozone, Toys R Us, Mcdonald’s, cell phone stores, and other local businesses either burned or looted.

Live streams being made available by independent and alternative news reporters at Infowars.com, Vice News and local station 41 Action News show fires at various Ferguson businesses. Gun shots have been reported across the city, though some of those may have been mistaken for tear gas canisters.

A Vice News ground team followed a police SWAT team that entered a highly volatile Ferguson street on which fires were raging. Police used bull horns to advise rioters that anyone found on the streets would be arrested.

Police were deployed to the area presumably because of an earlier report of shots being fired at firefighters and/or police officers. This led to firefighter teams reportedly being pulled from the area.

“Normally you would just see buildings burn, but the firefighters and police just didn’t have enough resources.” (Action 41 News)

Live Feeds available at the time of this writing via:

A series of about three shots is heard on tape less than an hour after the decision not to charge Officer Darren Wilson was made public in a televised announcement.

According to the man, a large number of police showed up on the scene immediately afterwards.

The National Journal also reported on the “possible gunshots”:

Already, there are reports of possible gunshots in Ferguson among large crowds. Obama asked police in the area “to show care and restraint in managing peaceful protests that may occur.” While saying that police have a “tough job” to do, he asked that “as they do their jobs in the coming days, they need to work with the community, not against the community, to distinguish the handful of people who may use the grand jury’s decision as an excuse for violence.”

Who may have fired the shots and whether anyone was injured is not yet apparent.

St. Louis County police descended upon the crowd and blocked of the streets.

Meanwhile, other early reports show that police have already fired tear gas and rubber bullets at the crowd. Via Craig Wood on Facebook:

At approximately 9pm as seen on live footage Ferguson police started an advance and started gassing and firing rubber bullets at a relatively peaceful crowd. The advance continues as I make this post.

At the time of writing (approximately 9:50 PM Central) Gateway Pundit is already reporting looting, burning cars and attacks on police with bricks.

Meanwhile, Sky News carried live images of this burning car on the scene:

How this will go remains to be seen; but clearly, anything could happen from here.