Well, itâ€™s been a bad 5 months. Gold has mostly just gone back and forth, and gold bugs are wringing their hands in frustration. But this is the problem with using intuition in the markets. One intuitively remembers the recent past, and one forgets the larger picture. This is the big advantage of using charts. So let us look at a chart of this bull market going back to its start in early 2001 just slightly above $250. 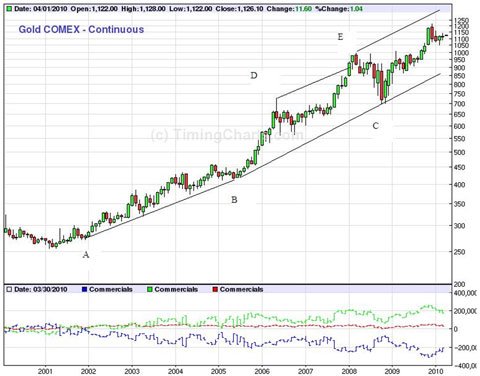 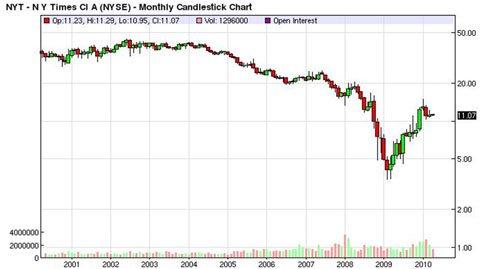 What the New York Times did over the past decade was to buy their own stock early in the decade, when it was near 40. After all, they are the greatest economists, and their company is the greatest company. What could go wrong? Now the New York Times stock is at 11, and a year ago it was down to 4 â€“ a 90% loss. They had to mortgage their new headquarters and take a loan from Mexican billionaire, Carlos Slim.

So who was better off, the gold bug or the establishment? The gold bug has 4 times as much wealth. He lives in a fine house and has a lot more stuff. He is surrounded by beautiful women. (Note to beautiful women. Gold bugs make good catches as they can treat you in the manner to which you would like to become accustomed.) On the other hand, if you are an establishment follower, you can go to parties, stick your nose in the air and pretend that you are one of the elite. Since everyone else at the party has read the same New York Times opinions, they will be struck by your great wisdom, and when you prove disastrously wrong, they will quickly erase that fact from their minds.

Going back to the chart of gold the chart makes us recognize the big picture. And the big picture is a gradual uptrend (which over the decade amounts to considerable). This is crucially important, and it cannot be said too many times: THE BIG MONEY IS MADE IN THE BIG MOVE. And yet we are all sorely tempted to remember the small move (because it is fresh in our minds). As you can see, the fluctuations of the past 5 months are just a minor detail. Soon they will give way to another up move (such as the rally of September, October and November of last year). This will be followed by another round of profit taking, etc.

One of the characteristics of the gold chart, which strikes even the casual observer, is the steadiness of the up trend. Chartists tend to be too mathematical and like to draw precise lines. But you probably get a more honest picture if you stand back and get an intuitive notion of the trend. For example, I have drawn two trendlines, AB (from 2001 to 2005) and BC (from 2005-2008.) An up trendline is drawn connecting two low points. To complete the picture, we select a prominent high point and draw a line through it parallel to the original trendline. Thus through D we draw a line parallel to AB, and through E we draw a line parallel to BC. These lines represent the top of the channel.

For example, when gold got above the line through D in early 2008, this was a signal that gold was (temporarily) too high. Together with other signals this allowed me to put out a sell signal on March 7, 2008. In essence, when gold is near the bottom of the channel (near the trendline), it is a good time to buy. When gold is near the top of the channel, it is a good time to step away and take profits. If you just interpret the lines roughly, then they give you useful information, and together with other signals you can get out close to an intermediate high. It was the same type of thinking which led to my sell signal (special bulletin) of Dec. 2, 2009. Now with the decline from $1,229 and the passage of time, gold has pulled back from the top of its channel.

A very important line (not drawn) extends from point E through $1,000, horizontally through 2008-09. This line was broken in October 2009 as gold moved above $1,000. When a technical pattern makes such a breakout, it is normal behavior to pull back to the break out point one last time before making its real advance. Thus, my original expectation (after the Dec. 2009 top) was for a pull back to $1,000.

But I argue in the April 2, 2010 issue of the One-handed Economist that this is one of those rare exceptions where the pull back does not go all the way to the breakout point, that the intermediate bottom has been made (at $1,050, not $1,000) and that we are ready for another leg up. Thus, I expect the gap between $1,050 and $1,000 to remain open, and this is such an unusual event that it must be regarded as a very powerful (in this case bullish) signal. The final proof that the gap has remained open will be a move in gold above the Dec. top at $1,229, and this event (together with the break above $1,000 back in October) will be a second signal that gold is in a massive, long term bull move.

In other words, dear gold bug, you ainâ€™t hardly seen nothing yet.

Another very exciting fact, which supports the bullish argument above, is the sharp drop in bonds which occurred near the end of March. It makes the bond chart look like a developing head and shoulders top. This top has not yet broken down (which will occur on a break below 112). But if it does break down, the implications are awesome.

Thus far, commodities have moved aggressively higher in the face of a flat bond market (2003-10). If we now get a declining bond market, commodities should explode, as they did in 1973-74.

What these considerations are telling us is that all the fundamental information which has been coming in since 1981 about the mismanagement of the U.S. economy is correct. It is merely that there is a long time between cause and effect. Ronald Reagan doubled the U.S. money supply. Bush Sr. and Jr. kept on printing money. The Treasury bill rate went from 16% to 0%. All of these distortions have to have their effect. Well, the bill has come due, and â€“ as Ayn Rand predicted â€“ it is marked â€œACCOUNT OVERDRAWNâ€

The vast majority of people do not understand what is happening. The printing of money is a counterfeiting racket run against them by their own government. To avoid being robbed, they must be in gold. This is why every organ of establishment opinion denounces gold and tries to scare you away from it. If you value your hard earned wealth, do not listen to them

You have made your way in the world by specializing and becoming very good in one specific area. You then trade your expertise, via the use of money, I too specialize, but my specialty is the field of economics â€“ monetary economics. Now is a time when we need each other. I understand the cause and effect relations when our own government depreciates its currency, and I can see these effects working themselves out in the markets in the real world.

What I have to offer you is my fortnightly (every two weeks) newsletter analyzing the financial markets with special attention to the precious metals. When the dollar goes down, gold goes up. When the dollar goes up, itâ€™s just a short term move because, in the days of Barack Obama, dollars pretty much do grow on trees.

My newsletter is the One-handed Economist ($300 per year). You may subscribe by going to my website, www.thegoldspeculator.com and clicking on the Paypal button. Or you may subscribe by sending a check via the U.S. mail to: The One-Handed Economist, 614 Nashua St. #122, Milford, N.H. 03055. (There is a $10 discount for paying via mail. So send $290.) Thank you for your interest.